Ducshop Performance Center builds Ducati engines that last and win at all levels of roadracing. From air-cooled Ducati's to the 1198R, we build engines to fit the rules of any organization.

Owner Mark Sutton consults customers around the world and the shop has built many winning Ducati engines. Mark spent 2001-02 as one of HMC Ducati Racing's key team members, first as engine builder and then as Team Manager. Building AMA Superbike national championship race bikes gave him entry to the Ducati factory, where he was personally trained in the Corse engine room. We use parts from Ducati Corse, Pistal, Pankl and parts developed by Ducshop Racing.

Mark rode a rapid path to national level racing. A racer himself, he won both the Washington and Oregon Open-Twins Championships at his first attempt. 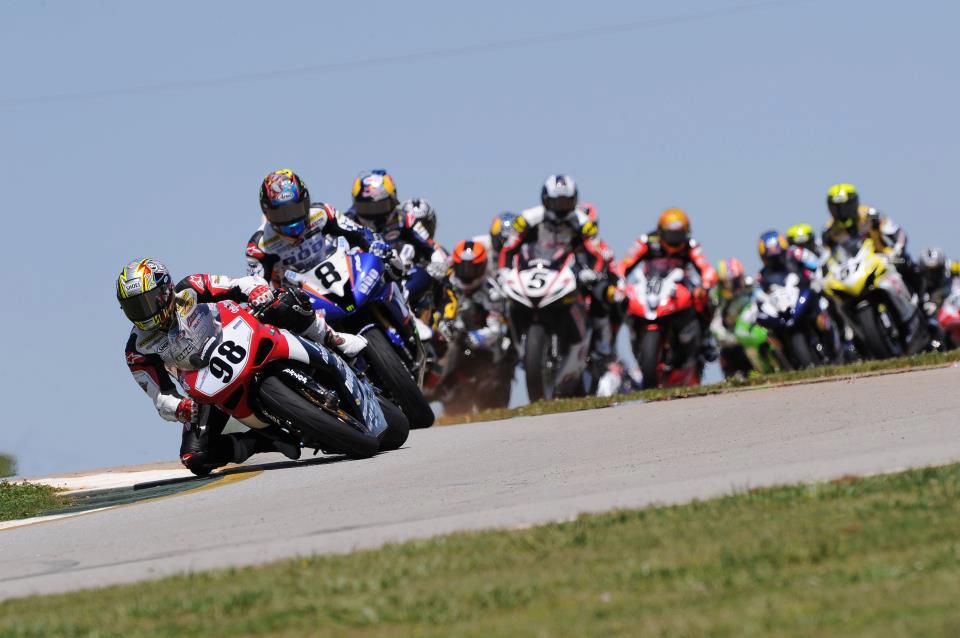 Zemke Solid at Road Atlanta Braselton, GA (April 22, 2012) – Ducshop’s Jake Zemke earned two solid  4th place finishes in Round 2 of the AMA GoPro Daytona Sportbike Series in the Big Kahuna Atlanta at Road Atlanta. After this round, Jake is firmly holding 4th place in the Championship with fifty-one points.

Jake qualified the Ducshop Ducati 848 with a 1:29.601, putting him in a great spot on the outside of Row 1 in 3rd position. He made the best of his qualifying spot by taking the holeshot in Race 2 and leading the first laps.

Jake said, “The crew did a great job this weekend, and we are making progress every time we go out. This added weight issue really hurts us, so hopefully the AMA will consider taking a look at it. In race one I had a clutch issue, got a rough start and shuffled back a little…had a good battle going with Dane, and then Cory. I told the guys if they could make some adjustments for race two, I knew I could get the hole shot. Dane and I battled it out again and he just edged me at the line by .040. Just looking forward to Infineon where the Ducati should go good and hopefully we can run up closer to the front."

Team owner, Mark Sutton, said, “Jake did a great job throughout the weekend especially considering he has had no official testing. In addition, AMA regulation requires us to maintain a minimum weight of 385 pounds without fuel. This definitely puts us at a serious disadvantage against the 4’s, but we will continue to do everything we can to give him a bike he can take to the front.”

The next round will be in Sonoma, CA, at the Great Clips West Coast Moto Jam on May 4-6 at Infineon Raceway. 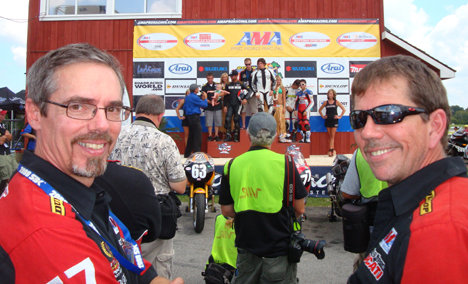 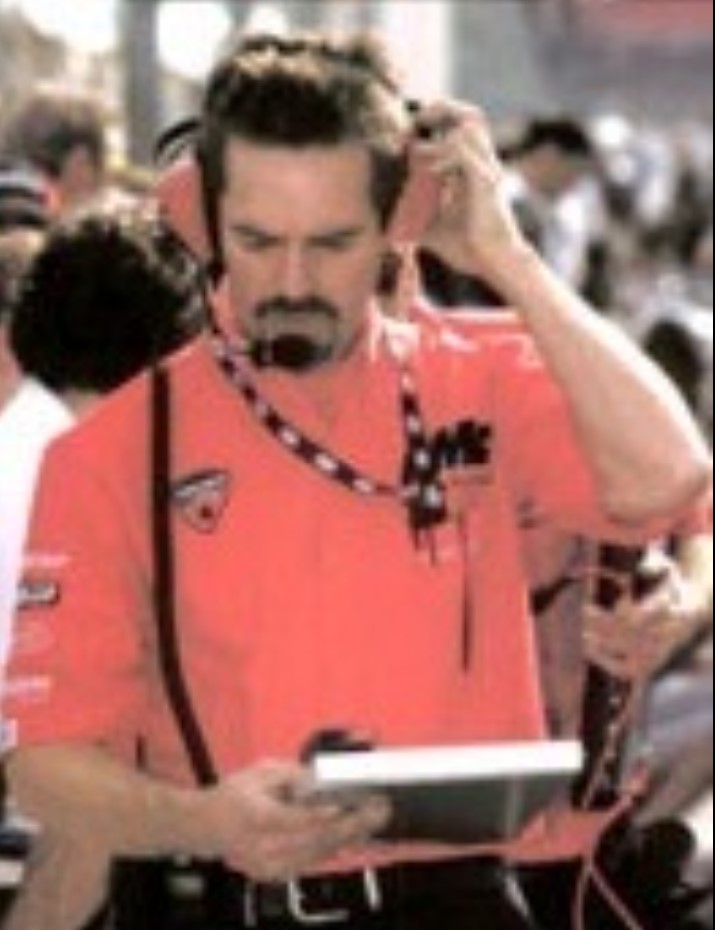 2002: In 2002 Mark spent his second year with HMC Ducati Racing, employed as crew chief and engine builder before taking over the team management responsibilities mid-year. The team achieved three podium finishes with pilot Doug Chandler and completed their best year to date. 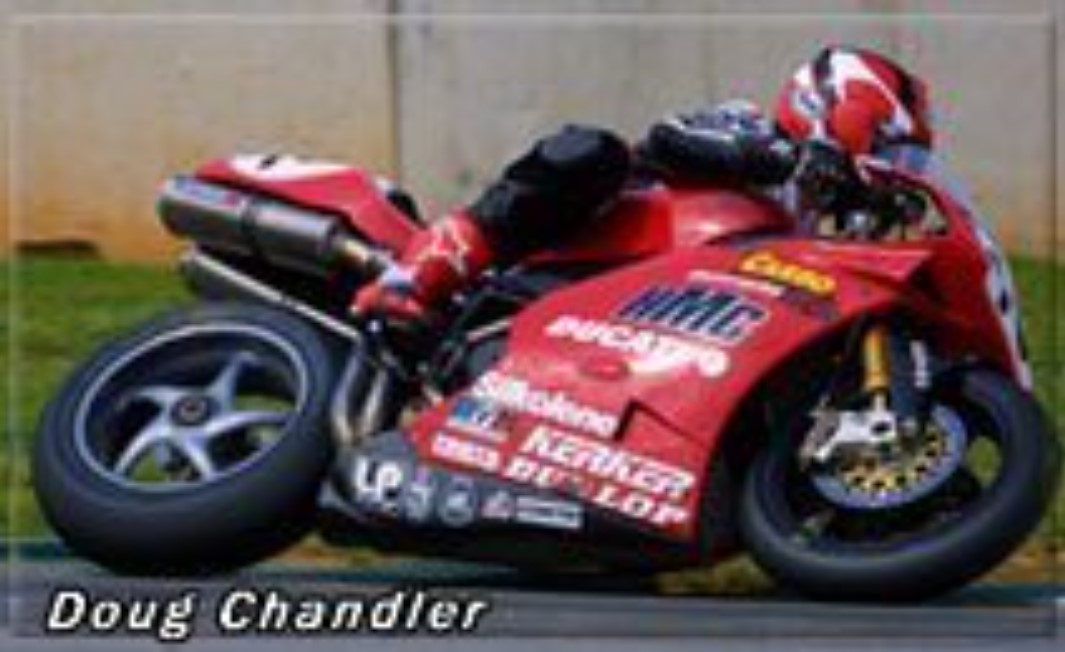 2001: Employed by HMC Racing, Ducati's AMA factory team, Mark moved to Wisconsin to maintain the sixteen engines of Scott Russell, Steve Rapp and Andy Meklau along with working on Meklau's chassis in the shop and at the track. 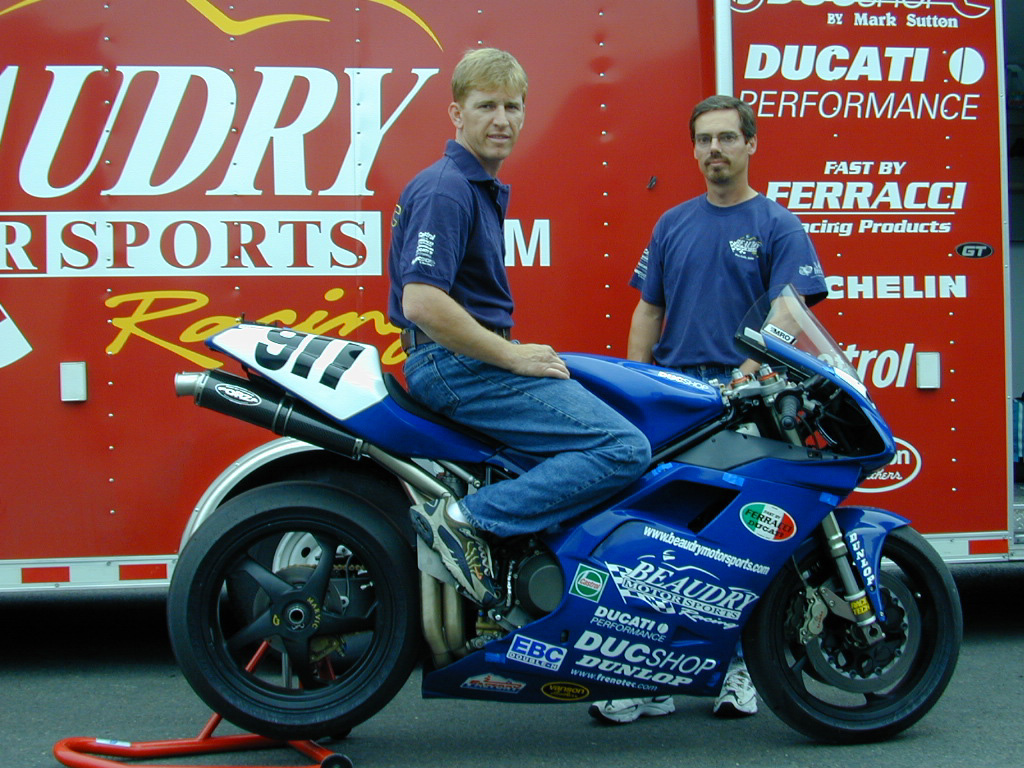 1998: Piloting his own Ducati, Mark won both the Oregon and Washington State Heavy Weight Twins Championships on a Ducshop 748 while building and crewing for many Seattle and Portland based Ducati's as well as day-to-day services run out of the shop. 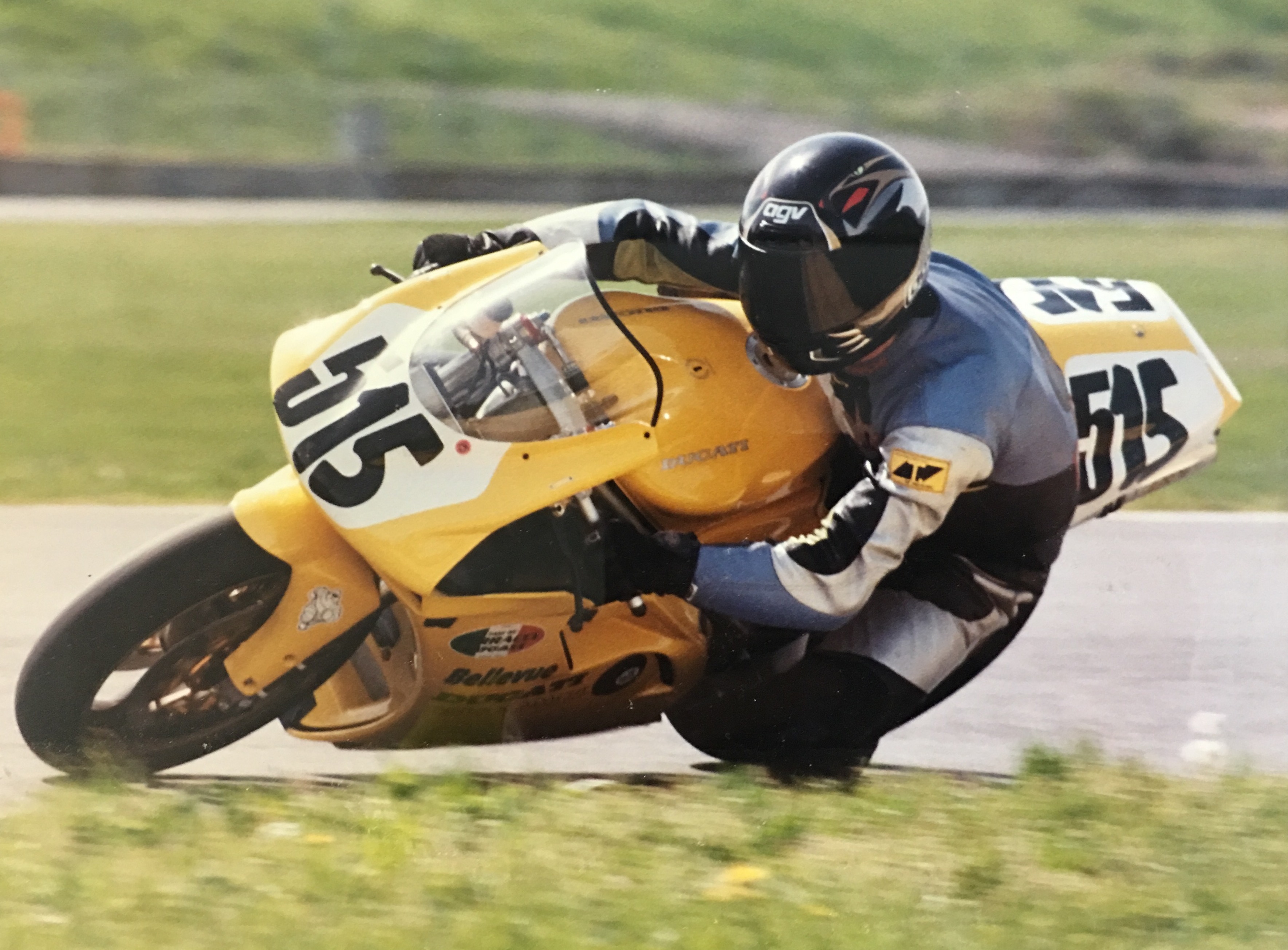 1996-1997: Mark worked for Fast By Ferracci on the AMA Ducati Factory team running 955 & 996 Superbikes. He worked directly with Shaun Higbie maintaining his engines and chassis, then Alex Gremini, winning two races at Brainerd and Road America. Prior to FBF Mark worked for the Ducati dealer in Seattle wrenching for Joe Pittman on an Ex Adamo 851 in WMRRA, AMA and Formula USA. 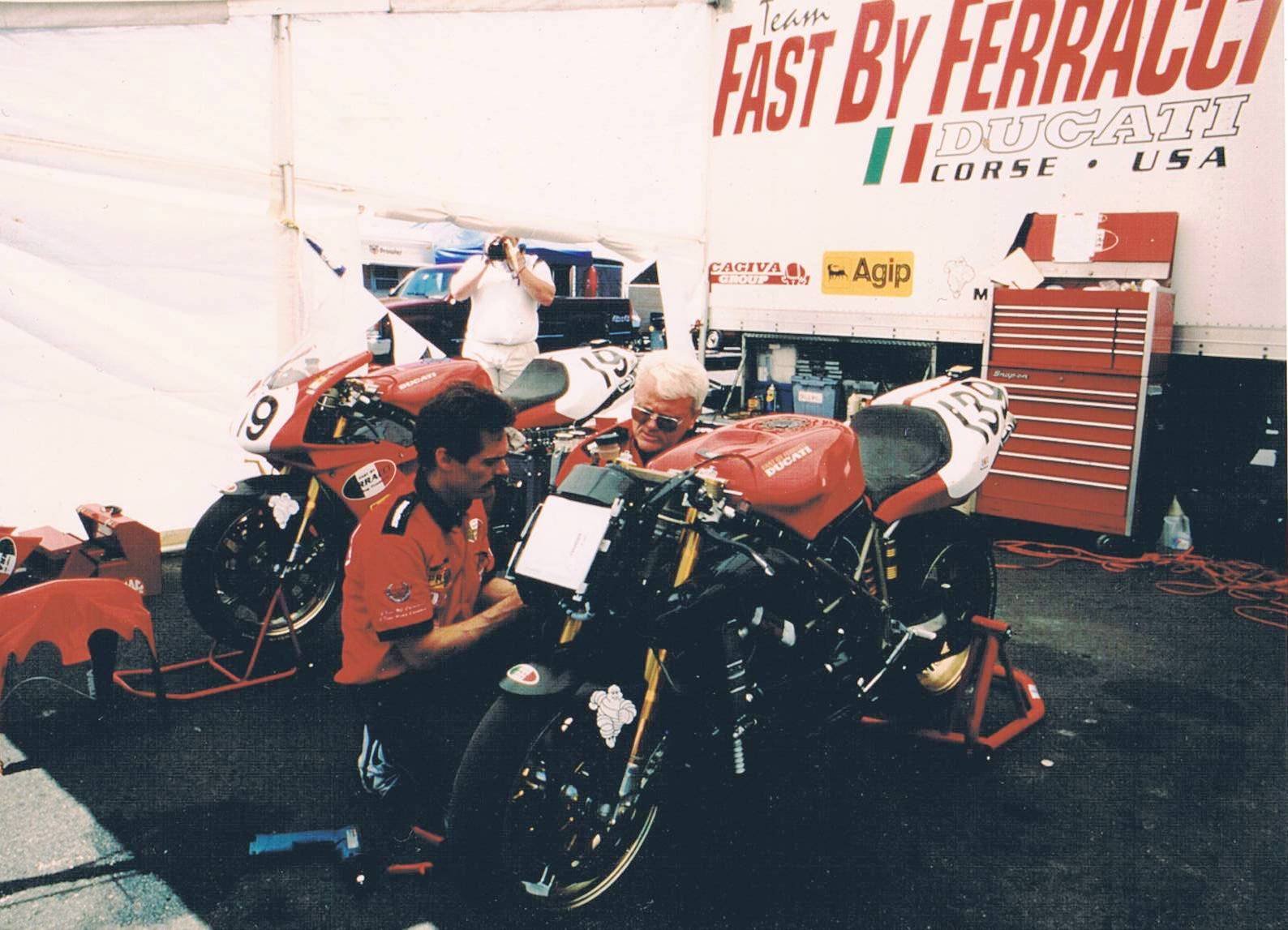